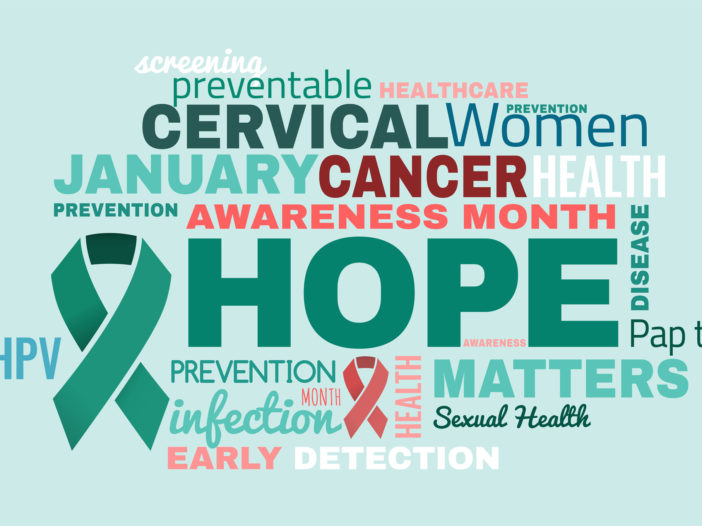 According to the National Cervical Cancer Coalition, more than 13,000 women in the United States are diagnosed with cervical cancer each year, making it the fourth most common type of cancer for women worldwide. Because it develops over time, it is also one of the most preventable types of cancer.

Human papillomavirus (HPV) is found in about 99% of cervical cancers. HPV is estimated to be the most common sexually transmitted infection in the United States. In fact, by age 50 approximately 80% of women have been infected with some type of HPV. Most women infected with the virus, however, do NOT develop cervical cancer.

While cervical cancer remains a medical concern, deaths from the disease continue to decrease, thanks in part to the Pap test which detects cervical abnormalities and allows for early treatment.

• All women should begin cervical cancer testing (screening) at age 21.

• Beginning at age 30, the preferred way to screen is with a Pap test combined with an HPV test. This is called co-testing and should continue until age 65.

• Women who are at high risk of cervical cancer because of a suppressed immune system (for example from HIV infection, organ transplant, or long-term steroid use) or because they were exposed to DES in utero may need to be screened more often. They should follow the recommendations of their health care team.

Vaccinations which target various strains of human papillomavirus (HPV)  have been approved for use by the FDA and are typically administered to young women who have entered puberty. While they have been proven effective, a Pap test is still needed, since the vaccine does not protect against all cervical cancer.

Schedule a Pap test with the professionals at Carolina OB/GYN and talk to them about vaccinations that protect against HPV, a leading cause of cervical cancer.