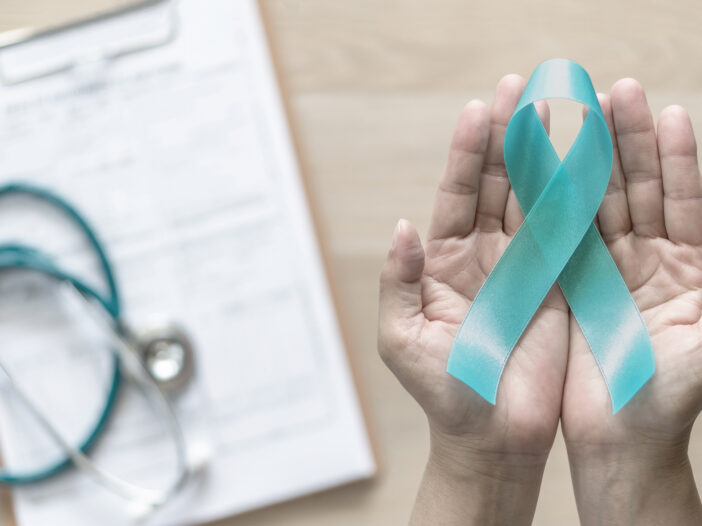 Cervical cancer is a type of cancer that occurs in the cells of the cervix — the lower part of the uterus that connects to the vagina. It begins when healthy cells in the cervix develop changes (mutations) in their DNA. A cell’s DNA contains the instructions that tell a cell what to do.

Healthy cells grow and multiply at a set rate, eventually dying at a set time. The mutations tell the cells to grow and multiply out of control, and they don’t die. The accumulating abnormal cells form a mass (tumor). Cancer cells invade nearby tissues and can break off from a tumor to spread (metastasize) elsewhere in the body.

• Vaginal bleeding after intercourse, between periods or after menopause
• Watery, bloody vaginal discharge that may be heavy and have a foul odor
• Pelvic pain or pain during intercourse

It isn’t clear what causes cervical cancer, but it’s certain that HPV (human papillomavirus) plays a role. HPV is very common, and most people with this virus never develop cancer. This means other factors — such as your environment or your lifestyle choices — also determine whether you’ll develop cervical cancer.  These factors may include many sexual partners, early sexual activity, sexually-transmitted infections (STIs), a weakened immune system, and  smoking.

To reduce your risk of getting cervical cancer:

Have routine Pap tests. Pap tests can detect precancerous conditions of the cervix, so they can be monitored or treated in order to prevent cervical cancer.

Practice safe sex. Reduce your risk of cervical cancer by taking measures to prevent sexually-transmitted infections, such as using a condom every time you have sex and limiting the number of sexual partners you have.

Don’t smoke. If you don’t smoke, don’t start. If you do smoke, talk to your doctor about strategies to help you quit.

If you experience any of the symptoms listed above, talk to one of our physicians. We proudly offer compassionate care for women by women, and we’re always here to listen.