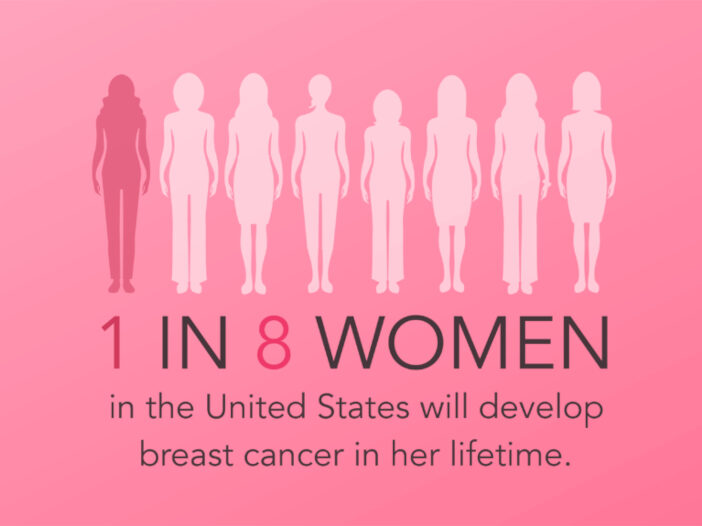 Cancer grows when a cell’s DNA is damaged, but why or how that DNA becomes damaged is still unknown. It could be genetic or environmental, or in most cases, a combination of the two. Most patients will never know exactly what caused their cancer. There are, however, established risk factors that are associated with breast cancer.

•Age:  Two out of three women with invasive cancer are diagnosed after age 55.

•Race:  Breast cancer is diagnosed more often in Caucasian women than women of other races.

•Obesity: Obesity is a risk factor for both men and women.

•Family History and Genetic Factors:  If your mother, sister, father or child has been diagnosed with breast or ovarian cancer, you have a higher risk.  Your risk increases if your relative was diagnosed before the age of 50.

•Menstrual and Reproductive History:  Early menstruation (before age 12), late menopause (after 55), having your first child at an older age, or never having given birth can also increase your risk for breast cancer.

•Certain Genome Changes:  Mutations in certain genes, such as BRCA1 and BRCA2, can increase your risk. This is determined through a genetic test, which you may consider taking if you have a family history of breast cancer. Individuals with these gene mutations can pass these mutations onto their children.

•Dense Breast Tissue:  Having dense breast tissue can increase your risk for breast cancer and make lumps harder to detect. Be sure to ask your physician if you have dense breasts and what this means.

In addition to genetic factors, there are environmental and lifestyle risk factors which include:

Substantial support for breast cancer awareness and research funding has helped create advances in its diagnosis and treatment. Breast cancer survival rates have increased, and the number of deaths associated with this disease is steadily declining, largely due to factors such as earlier detection, a new personalized approach to treatment and a better understanding of the disease.

Know the risks. Know your body and get regular mammograms. Early detection is key.